There’s just something about that second-line sound…

Last weekend we journeyed to New Orleans to experience Red Bull Street Kings, a battle rooted in the city’s rich cultural traditions where four New Orleans brass bands compete to win the title of Street Kings. This year’s battle was held Saturday, September 24 at Music Box Village in New Orleans. The venue is made up of a collection of wooden platforms, large cages, and structures, all equipped with instrumentation, built among a circle of trees offering just enough shade to make the 90-degree heat bearable. DJ Kelly Green kept spirits high before the competition kicked off and between rounds and host Downtown Lesli Brown brought outstanding energy that kept the crowd motivated throughout the day. 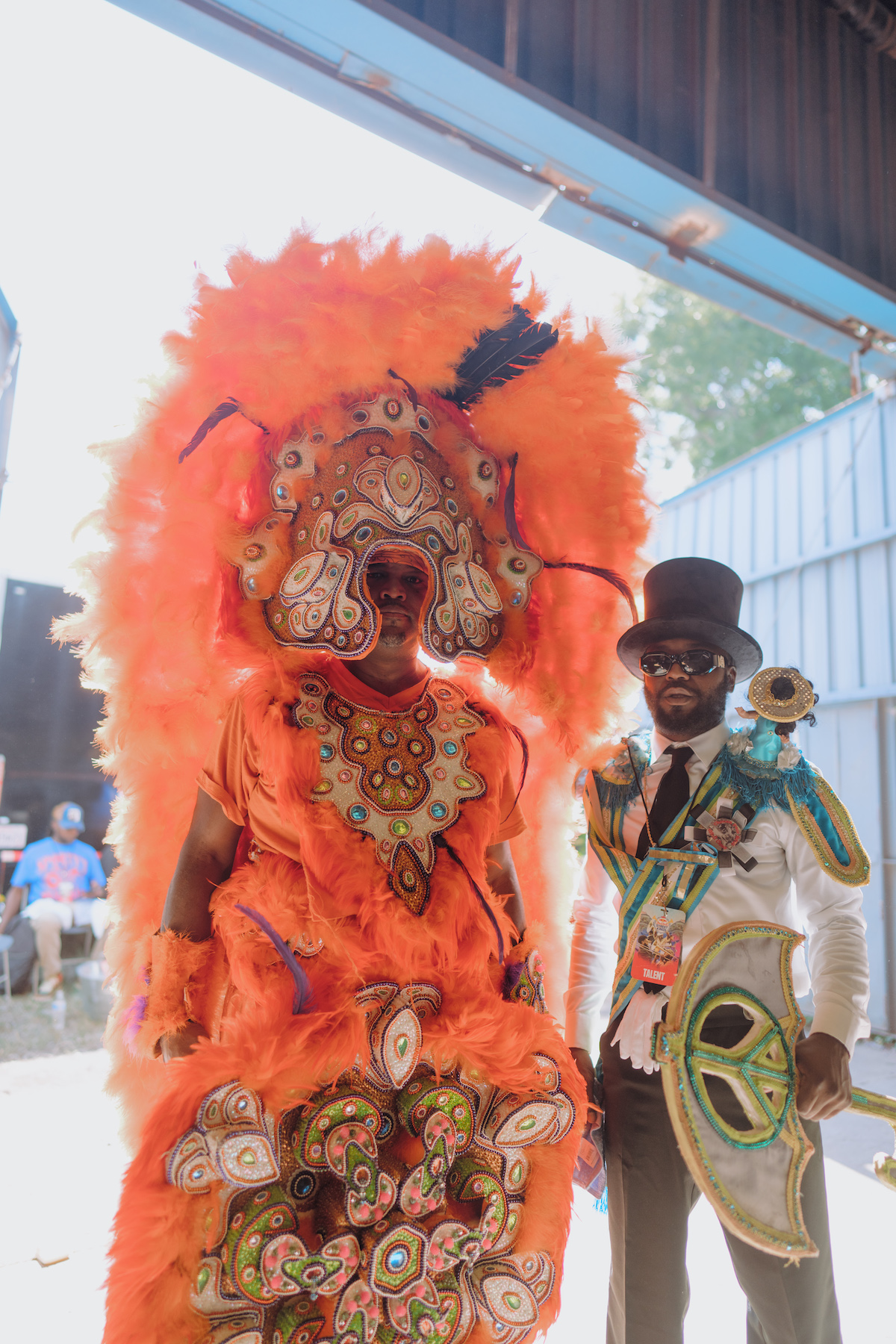 Each of the competing bands; Sporty’s Brass Band, Big 6 Brass Band, Young Pinstripe Brass Band, and Kings of Brass started the first round of competition with a second line to the stage. The panel of judges included hip-hop icons Mia X and Mannie Fresh, and local legends Christie Jourdain (Original Pinettes and 2013 Red Bull Street Kings winner), Alana Harris (Deputy Director of Arts and Culture), Chris Herrero (Band Director) who looked on as the bands second lined through the capacity crowd toward the stage. 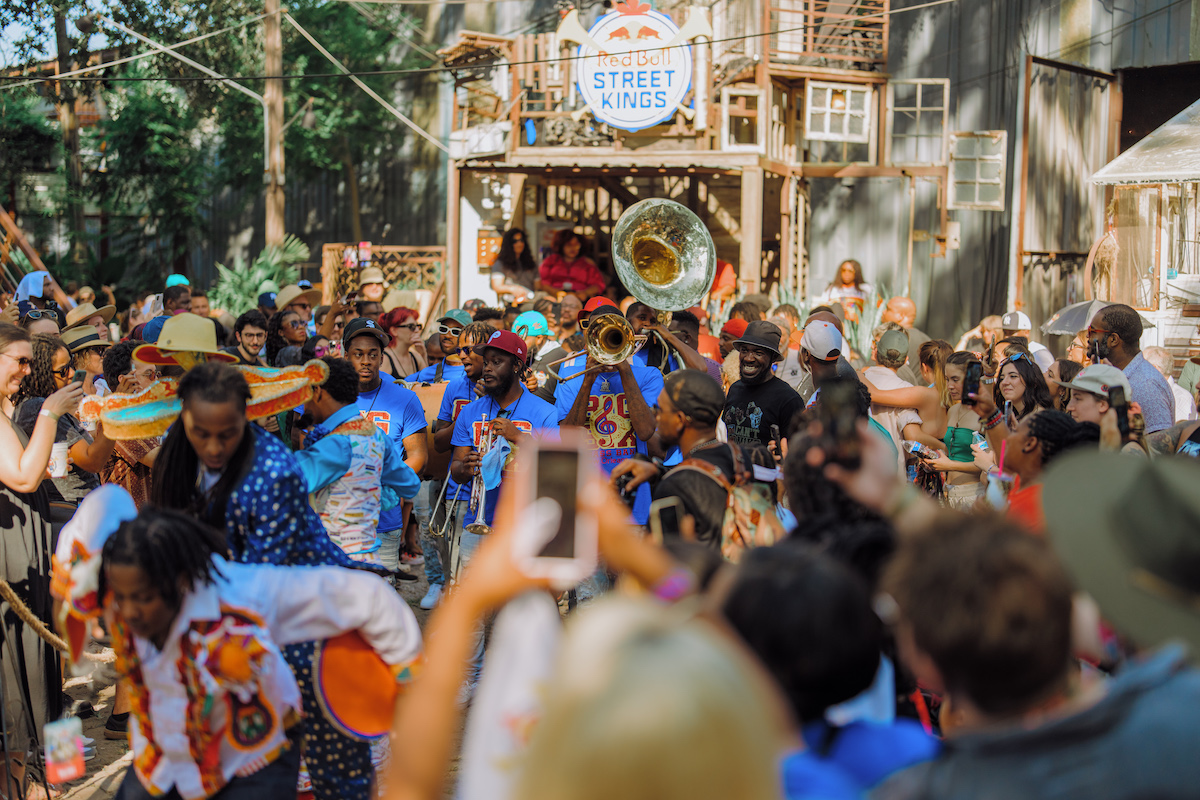 “A second line band, for those that don’t know, is a brass band that consists of six or seven guys from various neighborhoods,” Mannie Fresh told BOSSIP ahead of the competition. “Trumpet, trombone, tuba — very important, drummer — very important! The beats are that New Orleans feel, that syncopated, crazy offbeat feel that you love about New Orleans. Brass band, second line band, the band that ya mama ‘dem love, ya daddy ‘nem love, you love, that’s how it’s going down.” 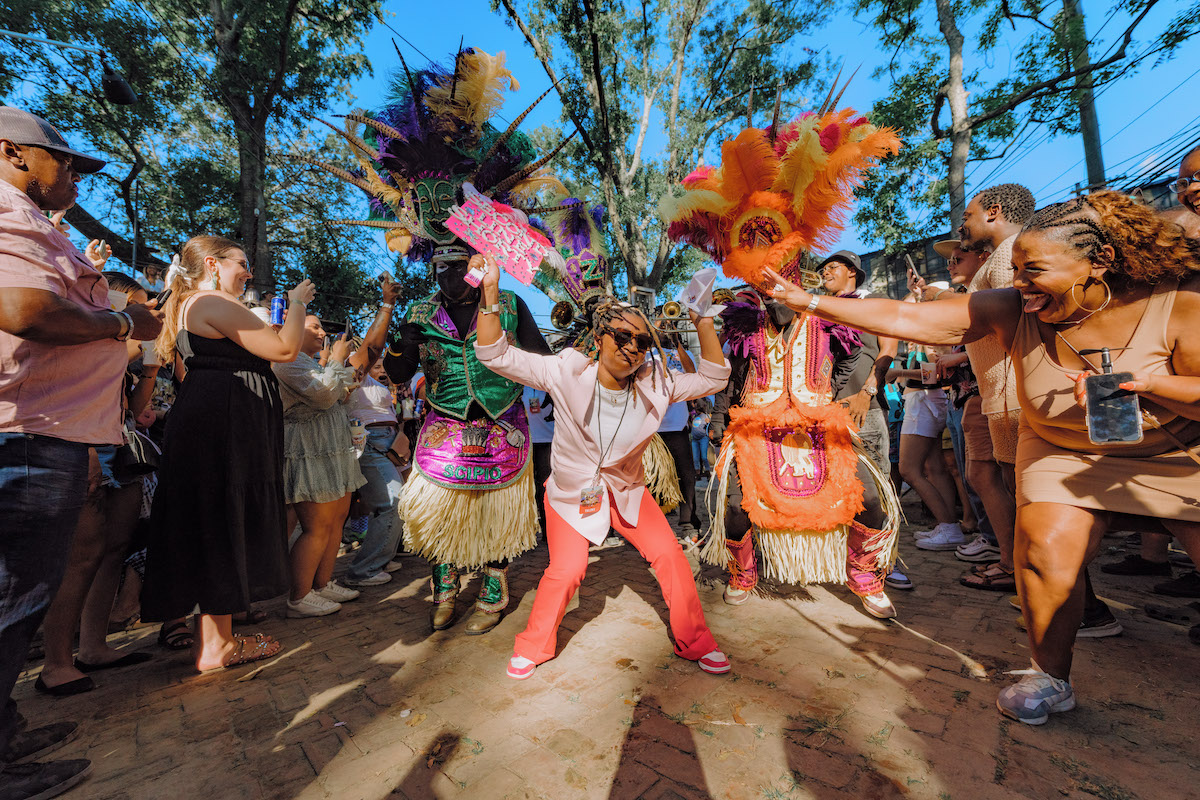 “Buck jump, second line, some of these dudes are so skilled, to see some of the dancers and dances that go with this,” Mannie Fresh added. “All throughout history, I know people have seen it on channels and stuff but to see it in person, how the crowd get behind these bands and follow these bands from neighborhood to neighborhood. If you haven’t seen it, this is going to be documented and hopefully, you’ll see New Orleans live in action.”

Live in action was definitely a sight to behold, with the whimsical venue filled with blaring brass, parasol twirls, colorful suits and hats, as bands performed a traditional brass song in the first round. In the second round, each band was paired with a Southern-based hip-hop artist. Stone Cold Jzzle, Alfred Banks, $leazy EZ, and Treety took the stage alongside their respective band, paying tribute to brass legacy with a modern infusion.

“The collaboration is fun. We need to do it more often,” said Alfred Banks, hip-hop collaborator of the winning band K.O.B. Kings of Brass. “Hip-hop and brass are more similar than people think. This is the start of something cool, and I think it’ll only continue from here.” 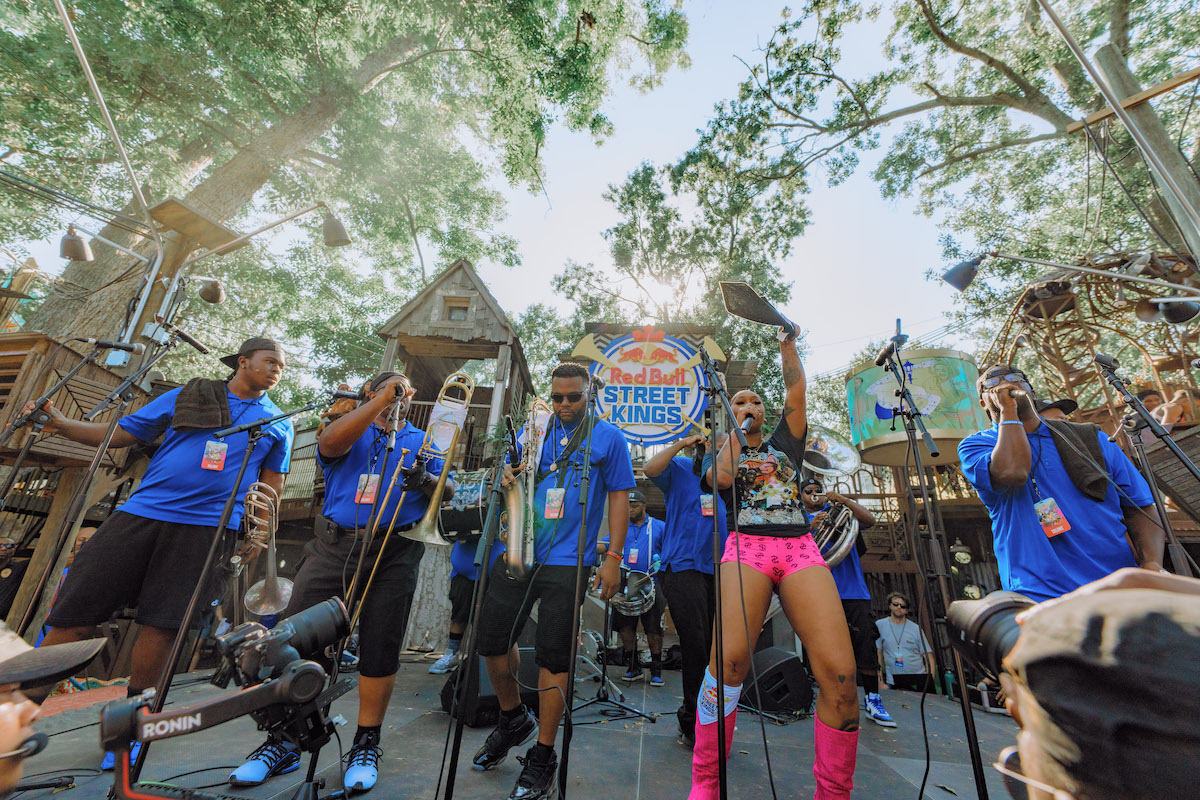 Bands were scored on-stage appearance, material, energy, musicality, and innovation. We spoke to Mia X on the morning of the competition and she told us, “I’m looking for swagger.”

“A lot of the young bands are taking the original brass jazz and putting their spins on it,” Mia X told BOSSIP. “That’s what I absolutely love. I love when they add their own chants. I’m looking to see how well they play because that’s important too, but I’m looking for that swagger and originality. We’re hard on our brass bands because they have to bring it. I’m just excited to see what they’re going to do.”

Following the judge’s deliberation, Sporty’s Brass Band and Kings of Brass advanced to the final round. 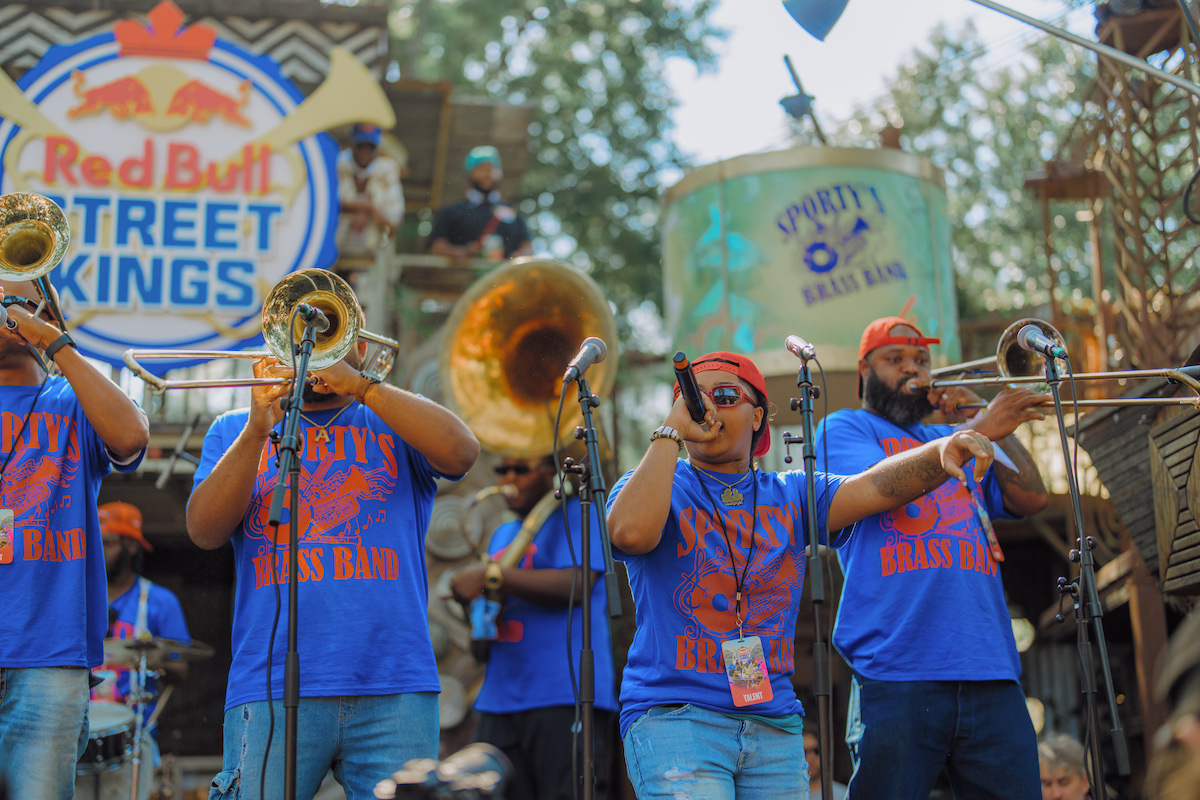 This is where things got really lively, with the crowd shouting from the audience to root on their favorites. At the end of the third round, 17-time multi-platinum record producer and judge Mannie Fresh threw a twist into the competition by demanding an encore.

“We want to throw it off a little bit. One more song. Blow it up,” he said. 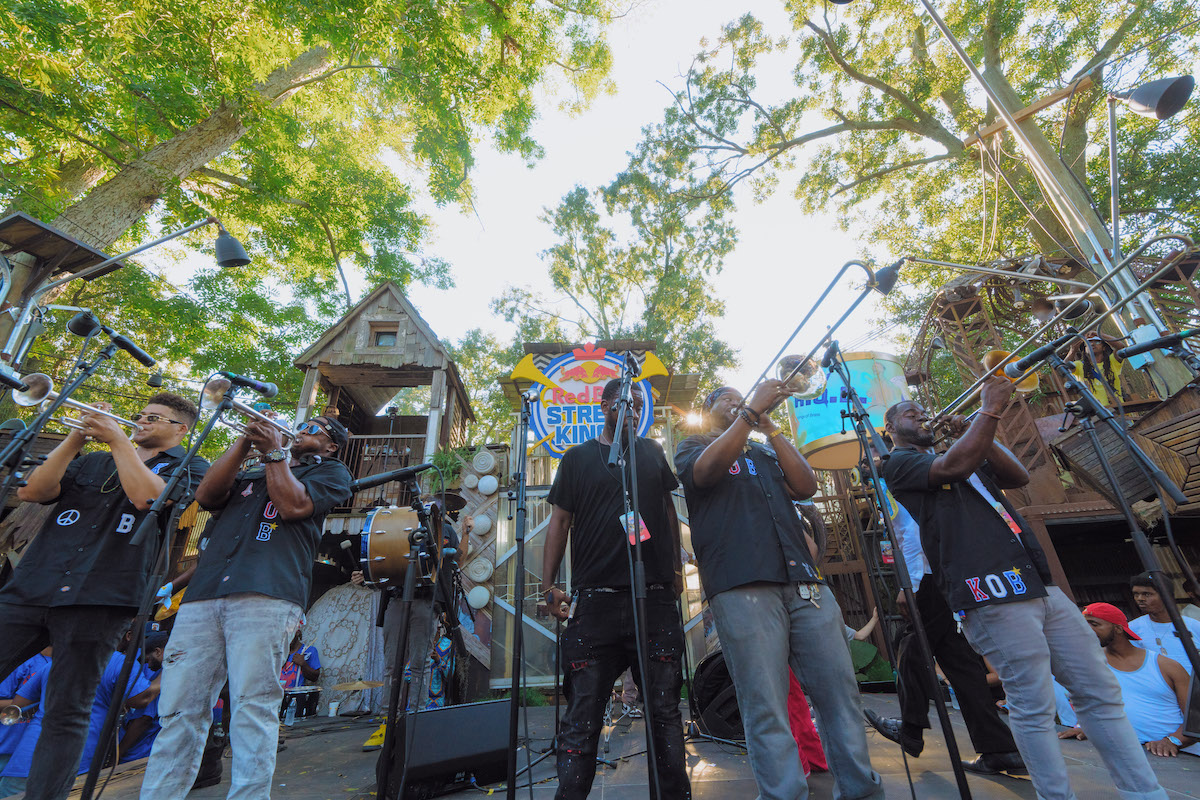 Sporty’s Brass Band and Kings of Brass took to the stage one last time in an unanticipated throwdown for the crown. In the end, Kings of Brass was the first band to step in, and the last band standing.

“The whole brass family everybody knows each other, everybody hangs with each other,” Gregory Warner of Kings of Brass told BOSSIP. “When we’re with our bands it’s war, but after that, it’s one big family. After we put our horns up we’re friends again.”

“The love for the music and the culture is way bigger than the competition,” said host Downtown Lesli Brown. “The culture is deep. I’m pretty sure anyone that didn’t take the crown today still won.”

Horoscopes For The Week Of November 27

Saweetie Receives Not So Sweet Review On EP, “The Single Life”

Keyshia Cole & Her Iconic Gap Are Back!

Netflix Brings Zelensky's 'Servant of the People' Back to the Service